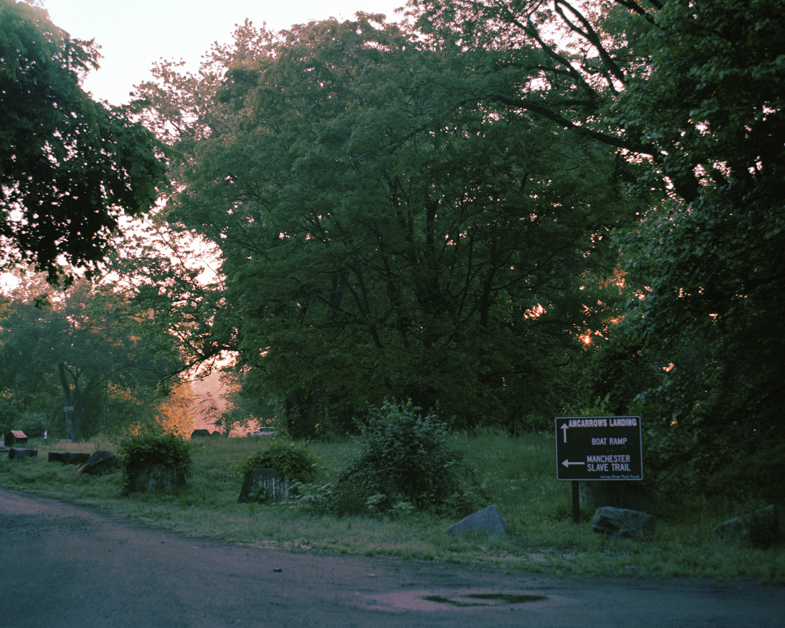 Between the years of 1830 to 1860, Richmond, Virginia was the largest source of enslaved Africans supplying the east coast of the United States with slave labor. The three-mile Richmond Slave Trail, created in 2011, contains 17 points. It spans from the slave ships’ entry point at Manchester Docks to the Lumpkins Slave Jail, an area also known as the Devil’s Half Acre. These images are part of a larger narrative, which documents the Underground Railroad, former sites of slave markets and the role slavery has played in American history.

Throughout the last 170 years the sites have lived several lives or incarnations: the Old Negro Burial Ground was a dog pound in the 1930’s and used by Virginia Commonwealth University as a parking lot in the 1970’s. The asphalt was removed six years ago and it is now an empty grass field. There is a haunting silence, belying the violence of being a former site of slave hangings and bodies being discarded to unmarked graves.

The Richmond Slave Trail exists as an acknowledgement and a continuing work in progress towards a culture recognizing its problematic past and how it formed the socio-economic climate of this country.

Passing Through presents light trails photographed at night, visually representing time and movement in its most literal way. By capturing the Earth’s revolution over various periods of time, I’m using photography to display the movement of airplanes throughout the world. The images communicate that mankind is in a constant state of movement; even while one is standing still, the Earth is perpetually in transit. If we boil this train of thought down even further, every cell in our body is in constant motion and transition; essentially we’re never still as humans or as a society.