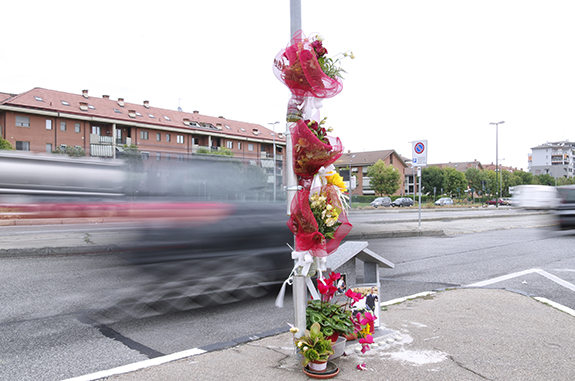 Drifting in the city sometimes my eyes are captured by something or someone I would not expect. One day, in fact, during a walk my attention and my camera were attracted by a road sign covered with colorful flowers. The colors of the flowers contrasted with the grey of sky and asphalt. Those flowers were placed there by relatives or friends of a victim of the road. Lately I discovered many memorials like this in my city and in other Italian cities. If we read the statistics of deaths in road accidents we remain petrified by the proportion of the case. That’s why I’ve called this series A Silent War. There are many deaths, but spaced out in the 365 days they will not impress public opinion.

Except the associations for sustainable mobility no one hits the road to protest against the enemy that kills. We have few moments of dismay when we hear news of a road victim, moments that become hours or days if the victim is a friend, the days become eternity if it’s a beloved one. Well, these are the memorials in my city. They are not usually captured by the eyes of the drivers, and still are perceived as something alien to our lives. These altars represent the pain that widens in the city. The collective unconscious wants to remove it and forget about it. Every time we go down the road we should think that we are sitting on a weapon and we must remember the martyrs of this silent war.