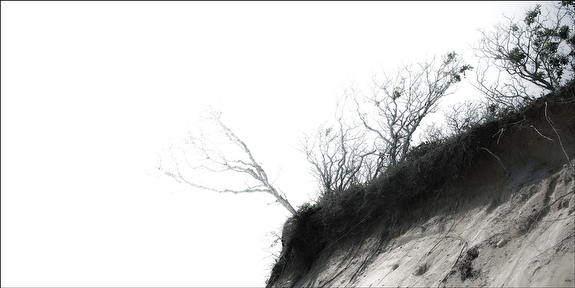 In 2010, I began an exploration of the intersection between photography and classical Chinese landscape painting, with the Homage to Ni Zhan and Bada Shanren series. In the Wasque Series, which was taken at Wasque Beach on Chappaquiddick Island in Massachusetts, I extend this exploration.  If classical Chinese painters ground their work in the style of a previous artist, I seek to ground my new work on my previous series, but also to evolve its style and technique while remaining true to my original sensibilities.

As in the original series, this new series’ sensibility continues to be grounded in the 13th century landscape painter Ni Zhan, who is known for his spare style of thin ink work, and in the 17th century painter Bada Shanren, who is known for his impressionistic style and unsettling compositions.  In these images, I continue to over-exposure, aiming to capture the backbone of the landscape.  Yet, unlike the work of Ni Zhan and Bada Shanren and my earlier 2010 series, I have introduced color.  In this manner, I continue to explore the intersection of photography and Chinese landscape painting by having introduced elements of the Tang Dynasty (7th C. -– 10th C CE) court painters in this new body of work, where color is used in a limited fashion.