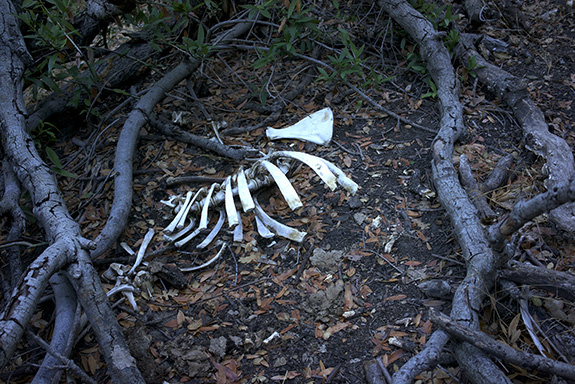 Briones is a regional park in the hills east of Berkeley and Oakland, California. I have been photographing the landscape and the cows that live in the park for several years now. There are areas that are wooded where I have been photographing the trees and where I occasionally find the cows, especially when the weather is hot. In November I went back into the woods further than I had in a while, past a tree which had fallen over the trail, and found a cow that had died.

The cow had been dead for some time as I immediately noticed that there was no odor and there were no flies. What was there was a shell of what used to be a living creature. Considering all the leather worn in the world it is probably not surprising that the shell of the dead cow would remain mostly intact even in death months after the fact. It has surprised me to see it still that way even after months of photographing it until the weather and the scavengers finally have left only bones.

I have photographed what remains. The abstract beauty of what remains behind is what draws me back to photograph time after time. Sometimes the image is so abstract that it is difficult to tell what it is, while other times — although abstract — the subject can be identified. There is a certain beauty in what remains of the cow, a certain stillness and beauty in death which I see in these images.