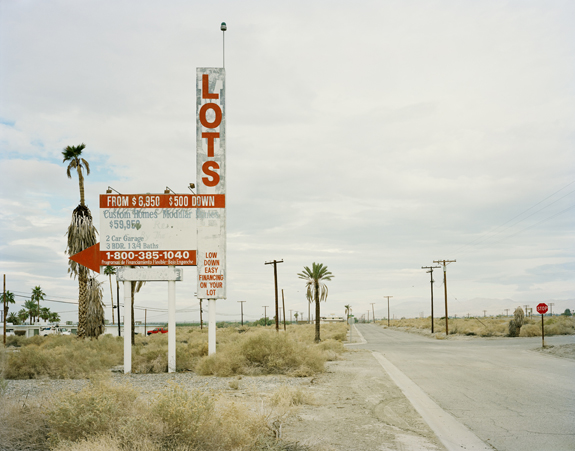 Fault is a photographic study of the western edge of the North American Continental Plate along the San Andreas Fault. The fault runs diagonally from the Salton Sea in southern California, northwest to Cape Mendocino where it then goes back out to the ocean. It is approximately 675 miles long. Earthquake activity, which characterizes the fault zone, is caused by the Pacific Plate sliding north relative to the North American Plate. If this movement continues, in many millions of years Los Angeles will be where San Francisco is now.

Despite the opportunity for dramatic geologic impact, the landscape is often mundane, even striking in its ordinariness. It seems as though the ordered built environment ignores the actuality of the land. I am interested in the visual traces (or not) of the tectonic plate edges as well as in the artifacts of our built environment upon these edges. My pictures show moments of quiet anticipation in settings that shift between the wild and the contained, the fertile and the barren, the geologic and the human. Fault is the second section of a project that will eventually be published in book form as Rift/Fault. Rift pictures the eastern edge of the North American Continental Plate where it meets the Eurasian Plate in Iceland, along the Mid-Atlantic Rift.