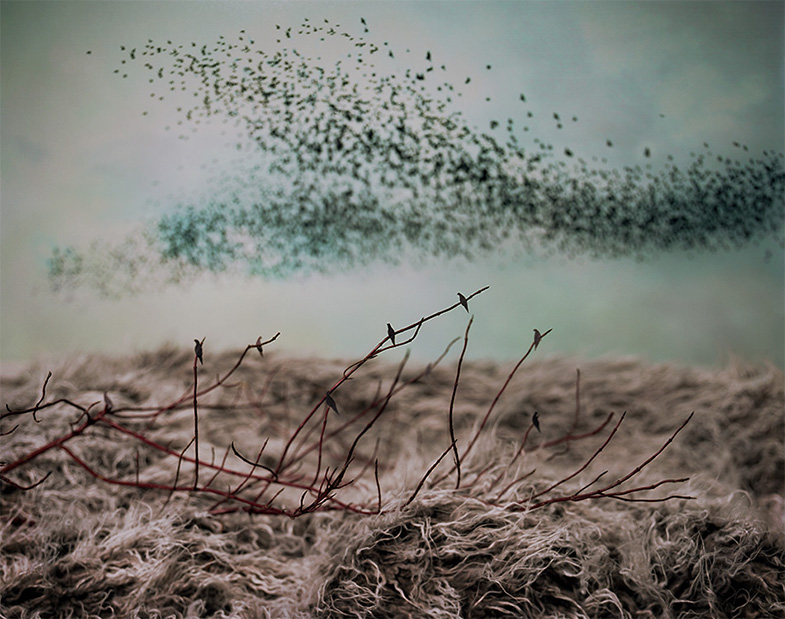 My art practice engages with our culture’s relationship (or lack thereof) with the natural world. This relationship is a complex one—we need it, we revere it, we protect it, and we also destroy it. But above all, we have separated ourselves from the natural world. In my work, I explore how these barriers and desires manifest themselves in our lives and our society.

Over the past few years, one way I have been exploring these relationships is by creating and photographing miniature landscapes using fake fur as the land substrate. The resulting series of large scale photographs, titled O Pioneer, hearken back to the pioneering Western photographers of the late 1800s, in a tongue-in-cheek manner. These photographers, such as William Henry Jackson and Carleton Watkins, surveyed the West in North America and brought back stunning imagery of splendor and bounty. Their images helped propel the problematic narrative of Manifest Destiny. Much of my imagery is directly borrowed from these historical photographs, while some simply reference the genre. The resulting series of photographs are clearly a simulation, a farce, with the fake fur as a reference to the lure of potential bounty as well as the resulting devastation.

Four artists, all of whom were featured on this blog, came together last month in Portland, Oregon, to reflect on a show of their work, Women in the Landscape. Zach Krahmer made a video of the discussion at Newspace Center for Photography, which hosted the exhibit. Jessica Auer, Jennifer Colten, Lauren Henkin and Dawn Roe participated in the discussion, moderated by Paul Sutinen. The 83-minute video is here.

Goldfield Studies began during my time as artist-in-residence at the Visual Arts Centre of LaTrobe University, located in the Goldfields region of Australia.  The photographs and video works produced serve as a record of my response to the surrounding bushlands and the disparate histories that comprise this space. Though not always visible, the abandoned mine shafts that pierce these grounds serve as markers, unearthing a complex web reaching back to the era of the first gold strikes the region is known for.

During my time in the Goldfields, I came to understand this space as repository of cultural memory constructed from the opposing perspectives of indigenous and colonial settler narratives, pastoral landscape representations, folklore and myth.  Confronted with this past, I found myself looking to uncover the poignancy of present moments, and the fleeting resonance of immediate experience.  My process combines a documentary approach with direct interventions into the landscape as well as constructions in the studio.  Deliberately clunky fabrications incorporate gold fabric and other materials that refer to mining, while also echoing the unsettling imagery of gothic fairytales that intermingle with this space.

While the particulars of location are essential to this series, the impetus for the work was a desire to reconcile documentation and interpretation. The layered narratives of the Goldfields, the palpable passage of time, suggested a rethinking around the formal language of the still and moving image.  I work with paired and multiple panels in an effort to deny a singular experience and to address the cognitive shifts between now and then, here and there.  Each view is represented as a distinct observation, emphasizing the necessary duration of present experience, suggesting that “your perception, however instantaneous, consists in an incalculable multitude of remembered elements; and in truth, every perception is already a memory.” (Henri Bergson)