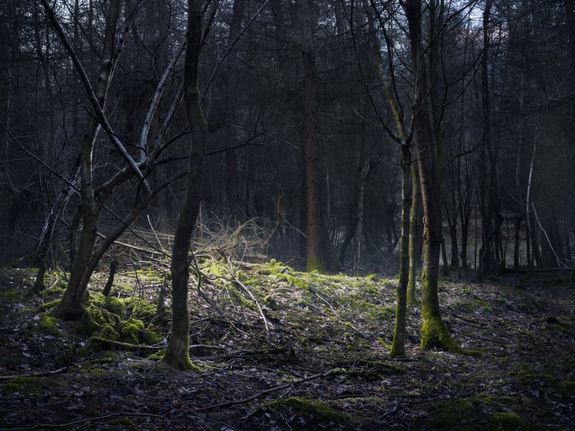 My practice involves extensive observation and exploratory research of a historical or changing landscape, built environment or interior space.  The Liminal Points project is a re-exploration of Penn Wood, Buckinghamshire and a journey back to a vivid childhood fantasy.

The term “liminality” stems from Latin “limen,” meaning boundary or threshold. Concepts of boundaries exist in all aspects of humanity and have been the study of many ethnologists, folklorists and philosophers. In particular, Plato considered the boundary between reality and a heightened reality or altered state of mind.

Working at dawn, dusk and night, blending natural and constructed lighting techniques in conjunction with elements from the landscape, the betwixt, large-scale images lie in a place that is somewhere between realities, as if you have stumbled upon a happening. For the artist it is a raw, solitary experience and a manifestation of contemplations on the wider world. There is a power nature holds when one is left alone with it and something that resonates in all people.  Visually inspired by cinema of the late 70’s and early 90’s and writers Katushiro Otomo and J.G. Ballard, the work collaborates with childhood friend Greg Haynes and the influential music of producer Deepsea. These different creative elements form new levels within and around the work.