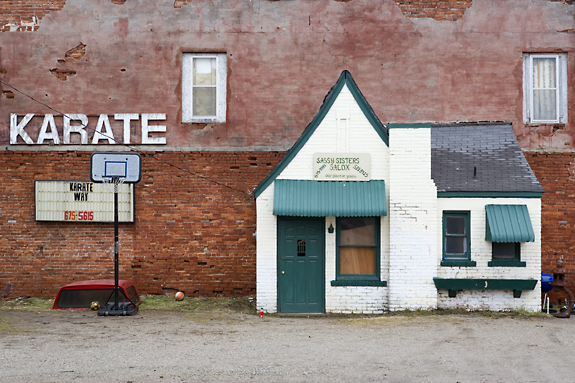 How did you start the Tar Creek project ??  What first drew your attention to it ??
A former student at Columbia College was from the region and doing a project down there. I was intrigued as I’d never heard of it and had never seen anything remotely like that particular landscape. I grew up in Youngstown, Ohio during the death of the steel industry. The sky was always orange, the river orange, and while I was in school there you could write your name on your notebook in soot after you left it open on the ground for five minutes. So I suppose I’ve always been drawn to marginalized, polluted places. In a lot of ways it’s home for me.

Who do you consider to be influences on your photography ??  How do you go beyond their work ??
Certainly Robert Adams was and continues to be a big influence. Emmet Gowin is huge. Lee Friedlander, Harry Callahan. I saw the work of Lewis Baltz early on and I didn’t think you could take pictures like that. I also had the opportunity to meet and spend some time with Frederick Sommer in Prescott, and I’ll remember him, his integrity and his work forever. I’ve also been a huge fan of Josef Sudek. Of course that’s just a few photographers. I’m also influenced greatly by music, painting, and poetry. I have a rather large ceramic collection. One of my good friends, Tim Wright, is arguably the best custom knifemaker in the country. His dedication to his principles scares me to death. How do I go beyond their work? That would be for someone else to say. I just hope I don’t embarrass them.

Why did you use a digital SLR instead of the often-used 4×5 for this landscape project ?? How did your tools support your artistic goals ??
I had built and shot with 8×20″ and 12×20″ view cameras, but a good friend of mine, Henry Domke, has been shooting digital landscapes for years, and making ridiculously large prints. He talked me into it just from seeing the work. I’d been shooting landscapes with a Hasselblad for a while, so the jump wasn’t that big a deal. And once I did, I never looked back. As with all things photographic, I think it was and still is a trade-off. But no coolers of film, and no scanning? I think one of the big differences is that I edit at the computer now, and shoot more in the field. For a long time and with the majority of the images from Tar Creek, I was always on the tripod. In the past year or so though, I’ve decided to loosen up some, and have been shooting with the 85 f1.2, wide-open, handheld.

You have an interest in the indigenous people of this polluted area, but you do not use portraits in this project. How do you explore the identity of the indigenous people ??
I always try to imply people in the photographs without photographing a specific person. I’ll look at a finished print and can’t help but see the people that “belong” in that landscape without them being there. Of course I do have many images of the people from the region, and those (and the people themselves) are probably among my best memories of the place, but are also the least successful images. I’ve photographed the annual powwow that’s held there (the oldest in the country) for a number of years. I also had the opportunity to photograph in Hoppy’s pool hall. It was unchanged forever, and filled with old photographs of miners and the mines. Every monday night a group of musicians would gather to sing songs. They shared one microphone and everybody got a chance to pick their favorite song. Often I’d be the only person in the audience. The best part of that experience was when I took the photos back to Hoppy, and he included them alongside the great old photographs on the wall. I finally felt as though I was a part of that place.

Is this project complete ??  If not, how will you know when it’s complete ??
I’m planning on going back again sometime in the next few months to do a little shooting and see what’s left of the place. I think it’s often hard to know when a project is finished, but in this case, it’s really leaving me. A few years ago, the government decided to move everyone out of the area, so three towns have been completely razed. Then a few years back a tornado came through and destroyed much of the largest town, Picher. There are a few holdouts, and oddly I’ve heard that some people are actually moving back into the area, but yes, I think I’ve pretty much stopped photographing Tar Creek.

What is your goal for the project (to make a book, have shows, sell prints, raise awareness) ??
I’ve had several shows with the work, and my goal in the next few months is to get a proposal off to a few publishers. It’s a fascinating place with a remarkable history that should be recorded. The challenge, of course, is in tying it all together and having it make some sort of sense, and to make it worthy of the people and place whose story you’re trying to tell.