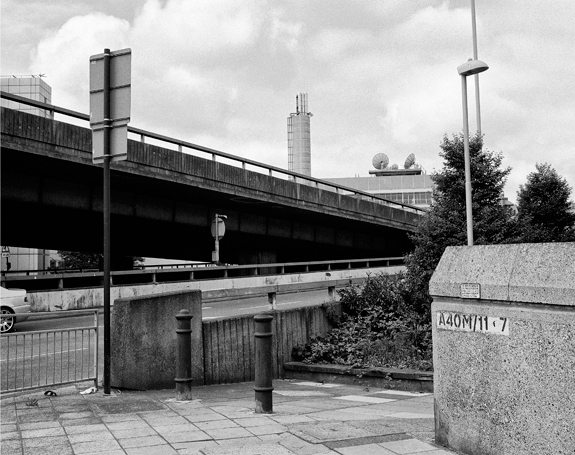 The commute is a relatively recent form of travel. Suburbia and exurbia ever-expanding into spaces designed to accommodate this transfer, the journey has become a formality. This project seeks to see through the eyes of the commuter and engage with the sense of loss his or her daily predicament engenders.

The commute is time lost; an ellipsis. No memoir, no matter how encyclopedic, would dare to record the minutiae of such a journey. By virtue of repetition, it ceases to register. The project approaches this concept in two ways: First, the images are still, absent in time, even when there is movement to record. Second, the spaces are timeless, from within the period of the commuter’s existence. All photographs were taken in “New Towns” around the M25 (the ring road surrounding greater London) — built in the 1950’s and 60’s to be autonomous, but eventually subsumed by the city’s overspill. Since the decline of modernity, this type of space has lost its historical specificity. It could be any time within the recent past; not old but not new. Frozen and timeless, therefore, the images resemble any memories we can hold onto from an experience so familiar.

The commute now takes place in spaces designed for its continued existence. They support its nature. In their aesthetic they encourage the journey’s seamless fall into non-memory. The project takes this aesthetic as the subject for its images.