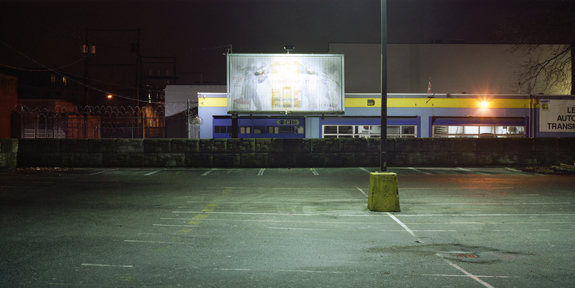 The central focus of the photographs in Billboards is a specific variety of mechanical billboard which, utilizing a prismatic design and timed motors, scrolls through three different advertisements sequentially and continually. By photographing these signs with an exposure long enough to record all three ads on one single negative, an in-camera intervention of sorts takes place. The necessary clarity of the original images is obliterated by the combination of time and mechanical movement – effectively robbed of their intent, they become layers of and contributors to a new, incidental image. If the Bechers were looking for “anonymous sculpture” in the industrial forms of their subjects, then I have stumbled upon a form of “anonymous collage,” one that cannot be perceived with the naked eye in real time.

While the billboards in the photographs themselves contain photographic elements of a commercial nature, they could hardly be described as rephotography; nor are they descendants of Pop Art or a guerrilla-type of anti-marketing. The sign in the real world remains unchanged — the intervention happens only in the camera and on the exposed film. I later recalled the work of Hiroshi Sugimoto and his Theaters, and it could be argued that the two series share visual similarities; however, where Sugimoto’s exposures left no trace of the original image on the screens of his theaters, elements of the original billboard advertisements remain in the new composite image – logos, images and copy overlapping – the visual equivalent of a corporate “mash-up.”