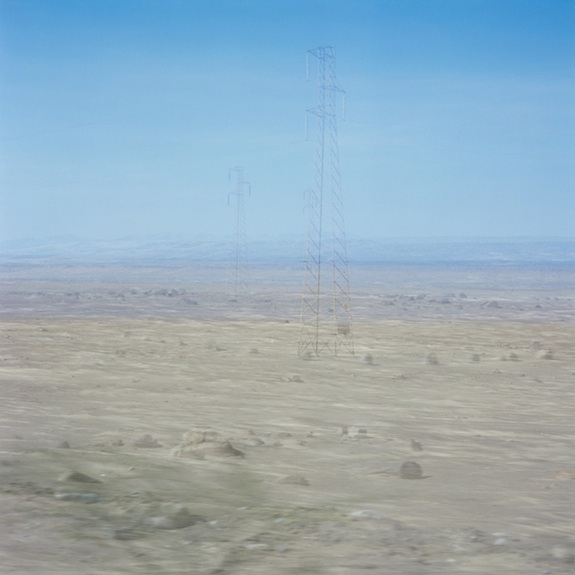 These photographs, a selection from a project entitled In/Between: Time in the Desert (2008-2012), investigate the visual display of time in the Peruvian coastal desert.

Amongst the driest regions on earth and wedged between the Pacific Ocean and the Andes mountains, this desert features ephemeral river valleys, frontier settlements, failed and prosperous agriculture, marine fossils, prehistoric remains, surfing condos, and lines of transport and communication both ancient and modern.

In the larger work I consider the landscape from several views and timeframes — examining structures of momentary stability and the influences of memory and anticipation on the perception of the environment. The group from which these photographs are selected, multiple exposures made from busses traveling along the Pan American highway, present a layered view of the passing landscape.

While working in the region I’ve considered the writings of the American artist Robert Smithson. In a text that accompanies his series of mirror interventions into the landscape, Incidents of Mirror-Travel in the Yucatan, Smithson reveals several layers of thought. Offering at first his own conviction, followed by a quote from Santayana, who references Schopenhauer… I’ve felt a bit of all of them.

“Artists are not motivated by a need to communicate; travel over the unfathomable is the only condition.

Living beings dwell in their expectations rather than in their
senses. If they are ever to see what they see, they must first in a
manner stop living; they must suspend the will, as Schopenhauer
put it, they must photograph the idea that is flying past, veiled in
its very swiftness.”