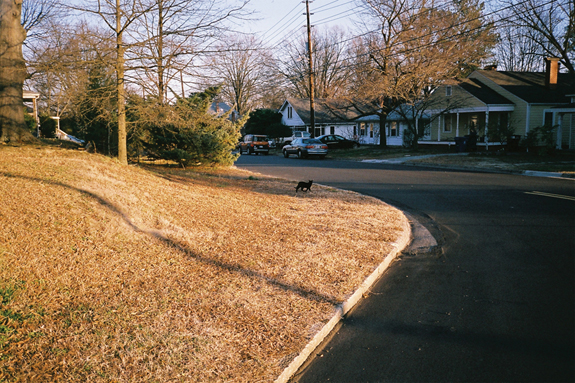 I strive to make photographs that are snippets of ordinary life. In November 2014 I published a photobook, Bungalows, featuring 100 photographs that were made while walking in Durham, North Carolina. Presenting this series as a book emphasizes the commonalities between images. Patterns emerged organically in their content and compositions, as I worked on the series over three years, using point-and-shoot cameras to capture scenes of domesticity.

Although these photographs are rooted in their locality, Bungalows also highlights homes and neighborhoods in a way that is broadly relatable, by depicting them from the perspective of a passerby. I think of this approach as a combination of street photography and candid portraiture that documents the landscapes of a specific place and time. This series is intended to blur the distinctions between public and private spaces. Its images feel intimate, yet a buffering distance exists between the subject and photographer.

I’ve often wondered what someone might think after seeing a photo of their home in Bungalows. I can only hope they would be pleased to know that another person paused for a moment to focus on its unique details and commit that lasting image to film.