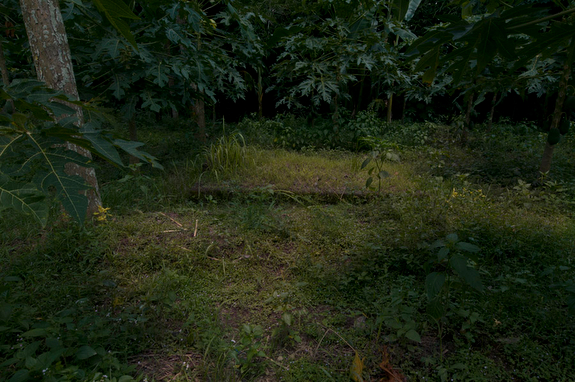 The Invisible Monument is a photography project that I did in my pilgrimage to various locations of massacres that occurred in Indonesia in 1965. These locations have changed or may have been converted into other forms. In the absence of instructions or accurate markers of the precise locations of the points, I tried to bring back the dark story that happened 50 years ago. This project is a response and my responsibility as an artist in trying to photographically document the historical facts in order to provide a new alternative view of Indonesian history.

At the age when it could have been called a ‘teen,’ Indonesia was in a very bleak era. People branded as members or sympathetics of the Partai Komunis Indonesia or PKI (Indonesian Communist Party) were arrested and tortured. There is no exact nominal figure on the number of these victims of human rights violation. Some researchers estimate between 1 to 3 million lives were victims of this barbaric act.

Until 1965, PKI was the third largest communist party in the world after the Soviet Union and China. In Indonesia, PKI was the largest party with millions of members and sympathizers. PKI has several organizations that serve as engines of the party such as Pemuda Rakyat (Youth Citizens), Lembaga Kesenian Rakyat (The People’s Art Institute), Barisan Tani Indonesia (The Farmer’s Line Up of Indonesia), Sentral Organisasi Buruh Seluruh Indonesia (Central Labour Organisation Throughout Indonesia), Gerakan Wanita Indonesia (Indonesian Women’s Movement) etc, all of which participated in almost every part of society at that time .

On September 30, 1965, six army generals and one high-ranking officer were kidnapped and executed. In that unstable period, Major General Suharto immediately appeared to take command for security measures and order. On October 4, all seven corpses were found in an old well in the Crocodile Hole. The next day the bodies were ceremonially paraded above APCs and buried.

But it did not end there. Various media in Indonesia were forced to close. The only media that could be circulated was affiliated with the army. In its report, PKI had done a heinous torture and murder against the six generals and one officer at the Crocodile Hole. Furthermore, the army’s media also described a form of torture committed by PKI in a very cruel and inhumane way. As a result, rumors grew about the barbarity of the PKI. People who were in a confused state just consumed the news and immediately took action against the cadres, members and sympathizers of PKI in Indonesia.

In many writings that I read, mass actions against the massacre of PKI was supported by the army. In fact, there were many places dedicated specially to train soldiers to execute the young men of PKI. The result was that millions of Indonesians, be it members, cadres, sympathizers and even relatives associated with the PKI were eventually captured, tortured and killed without going through the court process. Once executed, the bodies of the victims were buried at various confidential places or dumped into ravines, rivers and left washed up on the beach.

After Suharto became President, all matters relating to the events of the G-30S and genocide became one direction. In addition to the government (Suharto), no one was sure who they could speak openly about the brutal action. Suharto took full control of the state of Indonesia. The only source that could be obtained was controlled by the government — propaganda such as history textbooks, monuments and street naming, until the movie “Betrayal G30S/PKI” which was mandatory viewing for several generations. And hundreds of ‘propaganda products of the new order’ which must be swallowed by this nation so clearly ingrained, PKI is the enemy of the nation.

After the reformation and the fall of the Suharto regime, the mystery surrounding the G-30S and the mass killings that occurred began to open slowly. Hundreds and even thousands of articles or news that emerged after the reform era, suggested that what occurred around the G-30S that had been recorded in history books, films, propaganda monuments and hundreds of other products were inversely proportional to the reality of the matter. In some documents that I learned, it was written that the mass execution that occurred in Indonesia was a serious human rights violation and second largest after Hitler and his Nazis in the 20th century.

According to Bre Redana, history is a symphony of memory. History is nothing more than a collection and a series of different stories, (or even a myth ), about what happened in the past. History is always written by the winners. Even more if when we talk about the incident 47 years ago which has always been closed and manipulated, then the true historical facts that precise and accurate must be refracted.   Various efforts have been made to ‘bring’ history into our daily lives, ranging from the provision of street names, place names, or even to erect a monument.  I wonder how many standing monuments there are, ranging from big cities to remote areas throughout Indonesia. Monuments were established as a symbol, a marker and a reminder of the important things that happened in that location.   George Santayana, a writer and philosopher, once said, “Those who can not remember the past are condemned to repeat it.” So I would argue that the history of our nation needs to be straightened out, and should be remembered, so that similar incidents do not happen again.