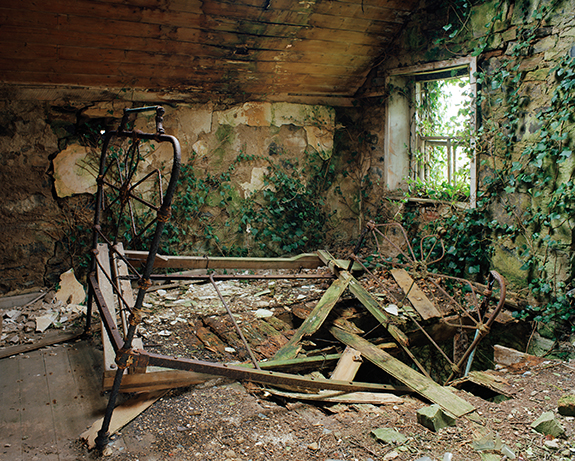 Making It Home is a series of photographs shot between 2014 and 2015 that explores the re-settlement of 11 Irish ex-servicemen to Cleenish Island, County Fermanagh, Northern Ireland. Began during the Centenary of World War One the project explores the story and legacy of this unique part of the post war re-housing scheme developed under the Irish Land (Provision for Soldiers and Sailors) Act 1919. Inspired by the postwar regeneration drive in Britain the idea of “homes fit for heroes” became the guiding force in what became an Anglo-Irish project to house and grant land to eligible Irish Ex-Servicemen who fought in the war.

Cleenish Island itself was a curious site to build these homes, given that there was no access except via boat. Combined with the fact that of the eleven men granted homes many were suffering from either mental or physical injuries from the war and had little or no experience of farming, it is not surprising that many of the men found life on Cleenish very difficult, and looked to build a life somewhere less isolated only a few years into their tenancy. By the time a bridge was built in 1956 only one man remained on the island — named Johnny Balfour. The fate of the rest was unknown until recently. Upon walking the island today only Johnny Balfour’s home, which is still inhabited by his son and daughter, remains intact. The other 10 homes are largely in a state of complete disrepair or completely demolished, leaving today only ruins of these former soldiers’ homes.

By connecting to a site such as Cleenish Island to the war crossed men that once lived here we indelibly link the site to this time in history and place it amongst the long list of sites bearing stories from the aftermath of conflict. The landscape and remaining soldiers’ houses of Cleenish Island now serve as a biographer to this time, allowing us to place a specific site to each man so that we may remember them and their continued struggle to survive, and re-build their lives after making it home.