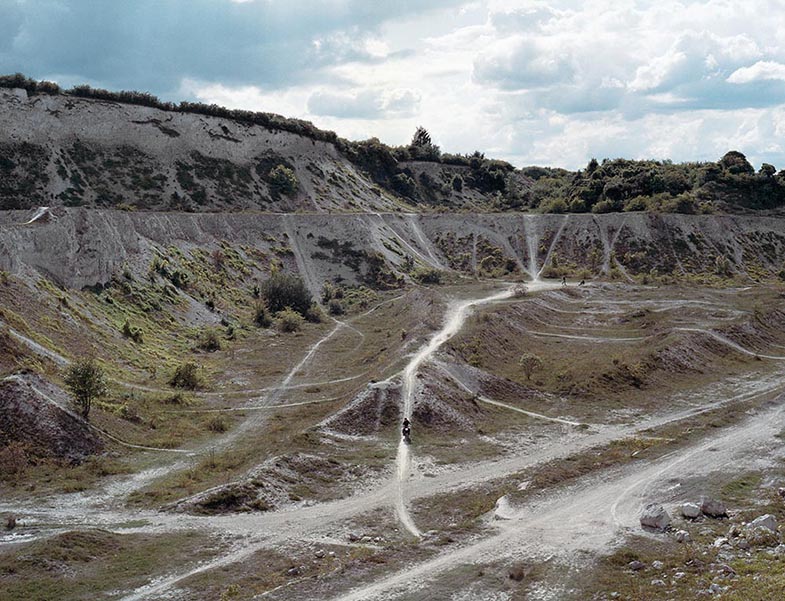 The Hole explores the destruction and abuse we place on our land for our own personal need and gain, represented visually by disused quarries. In time these forgotten locations, that are sparsely dotted around the country, slowly return to what they once were by virtue of man’s absence. Humans use and deprive the land at their convenience. When it comes at a disadvantage it’s forgotten about and the land is left to deal with the consequences. When the environment finally retakes what is there, it returns in different ways to what was once before. It’s a never-ending cycle of nature versus the human race — with, unfortunately, the latter coming out on top, indefinitely. 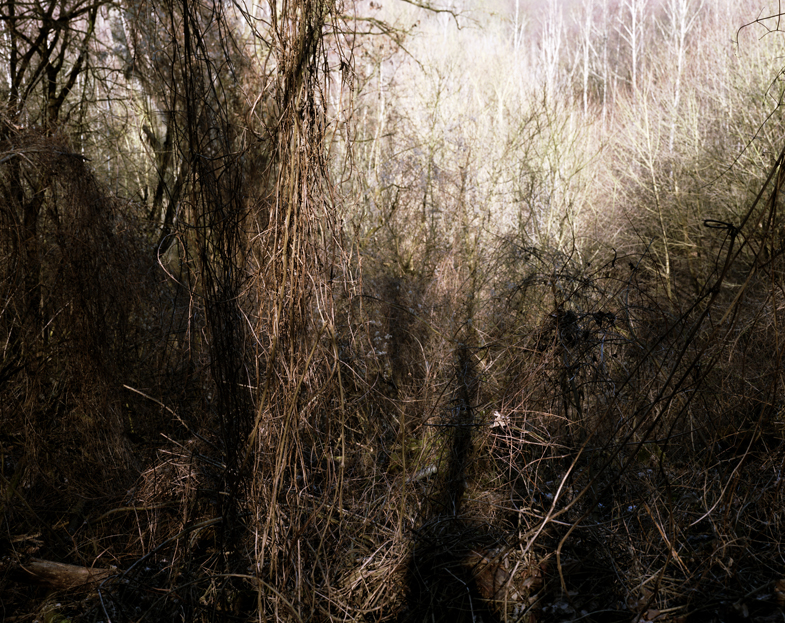 25,000,000 m3 Is a study of man altered landscape created as a consequence of violence and the ideas in the physical remnants of the city.

Teufelsberg (Devil’s Mountain), located in South West Berlin and surrounded by forest, is one of the highest points of the capital. This hill is used by the city’s residents for various leisure activities such as hiking, skiing, and cycling. However its natural surroundings belie its darker origins. A partly constructed military college designed by Albert Speer originally occupied the site. In the aftermath of the Second World War the rebuilding of devastated German cities took place.

One solution to deal with building rubble left was to use the material to form a Trümmerberg or rubble mountain. Huge volumes of debris were turned into such earthworks the largest in Berlin being Teufelsberg, which also covered the ruins of the aforementioned military college. Later with the division of the city the summit of the hill was the location of an NSA listening station, now abandoned.

25,000,000 3m studies not only the surface of Teufelsberg and its landscape, but also the layers of the destroyed city it is created from. Combining images of the hill’s topography and surrounding landscape whilst revealing what is buried under the surface, I am attempting to give physical presence again to the city’s past structure and the issues that arise from this.

The second part of this approach is via a process of recasting the shattered building fragments found on the hill using plaster. By duplicating them but removing colour and fine texture leaving only surface details, relief of layers of residue and marks. The emphasis less about the objects as individuals, but more about the wider investigation into the absence of a city’s past buildings.

This is an attempt to explore an idea of revealing what is hidden, buried in the landscape. Glimpses and fragments of what was once the city’s structures remain, leaving it impossible to experience the buildings and landscape as a whole. 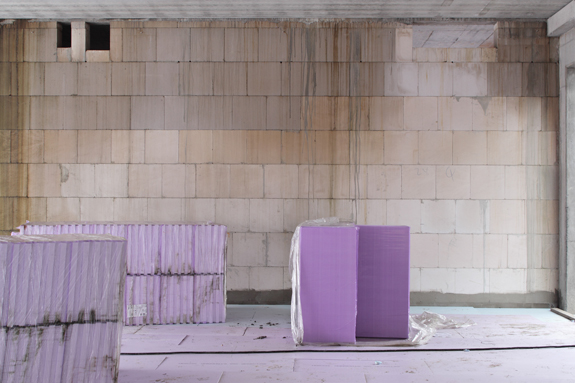 At construction sites in Europe on Sundays, I caught a wonderful art
of momentum…

Everything is constantly changing — between chaos and order,
building, demolition, rebuilding — but there are always moments in
process which exhibit some kind of momentum, perfection
and calmness — moments of rest and a certain romantic presence
between the continuously inexorable changes. 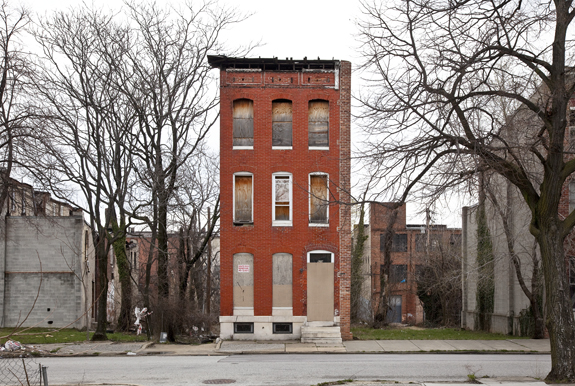 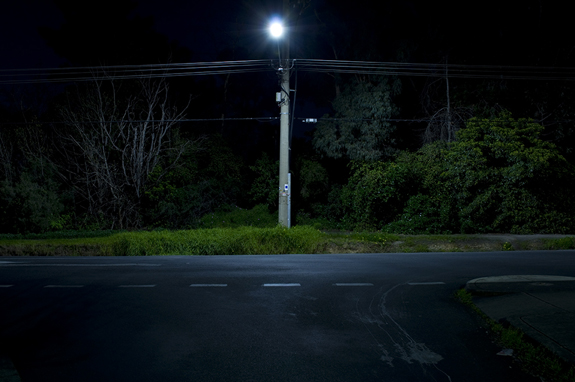 We see the suburbs as ugly; we lament the loss of natural beauty.  We rush around by day filling every second, yet feeling completely unfulfilled.  And while we sleep wondering what it’s all about and perhaps dreaming of what once was,  the silent beauty of the landscape returns; altered, yet still there.

People have described my work as dark and menacing, with a foreboding quality, but I think this is more to do with the viewer’s own perceptions, formed by influences like human nature, upbringing and a paranoid media; which push the idea that bad things happen at night. For me, these are places that have a certain magic to them, rather than menace.

While the urban landscape is full of activity by day with people and cars, my photos are absent of these so as not to distract the viewer. There is a distinct absence of people because human nature first draws our attention to figures, and away from the landscape. The focus of my photography isn’t on people but on place, on the landscape itself.

My series, Suburbs at Night, is an ongoing exploration started in 2009 that attempts  to seek out these spaces and the landscape that remains, although forever changed, still timeless.

I look for a beach, usually facing West, and set up my 4×5 or 8×10 camera, often at sunset. As the light fades, I make long exposures of the last few feet of sand, a few feet of water, and the shifting edge between them, allowing the motion of the waves and reflections of the sky to combine in unpredictable ways with the chemistry of the film. I crop the resulting images to exclude the horizon and to emphasize ambiguities of scale and substance, looking for effects that are both seductive and unsettling when printed at large size. 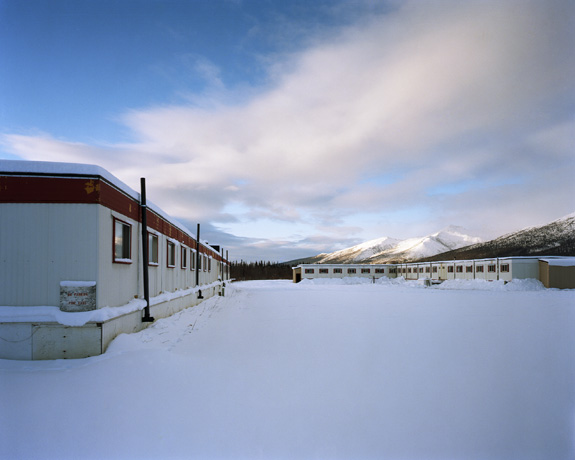 Completed in 1974, Alaska’s Dalton Highway (known locally as the haul road) is the northernmost road in America. At 414 miles, the predominately dirt road follows the upper half of the Trans-Alaskan Pipeline, and is maintained exclusively as the transportation route for the oil fields at Prudhoe Bay. The road was opened to the public in 1994.

I began running the road in the Fall of 2007. Always North or South — advancing or retreating. The road is in my blood. The hum of my tires in my ears. Those I meet on the road are mostly searching for something. Some know what they search for, while others hope the answers will come from the landscape.

My own search begins, and ends, with the road — a dirt scar, cut through an impossible landscape. Beautiful and heartbreaking.

This is the ‘last frontier’, yet here we are.