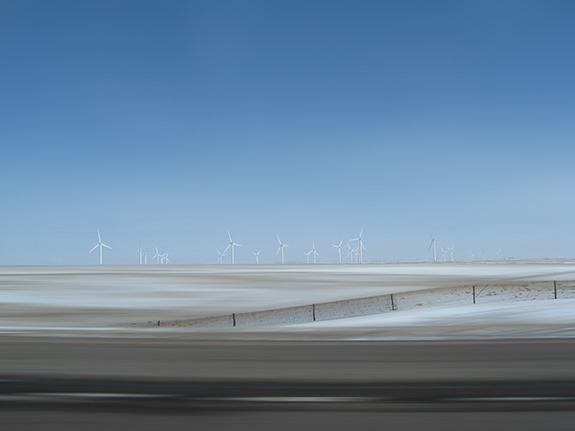 I took a series of photos, titled Point & Shoot @ 70 MPH, out of the passenger window while on a 6,000-mile road trip with my husband in the spring of 2010 from Missouri to California and back. I used a point-and-shoot camera deliberately to capture images in a very spontaneous way. Many times we passed so quickly (at 70 mph) that I missed shots, but other times I was able to anticipate and shoot before I really saw and was surprised by the captured image.

I was mesmerized by the changing landscape and, since this was April, we also encountered vast seasonal changes, from the dark gray sky and flat leafless plains of Nebraska, to snow closing the freeway in Wyoming. Once over the Donner Pass, the brilliant green of early spring in Northern California was almost blinding.

Upon return, I set about to sort through my 4,000 photos and pick those that best captured the feeling of motion and change. I took these base images and manipulated them to heighten the motion and the emotional attachment I have to this vast land.