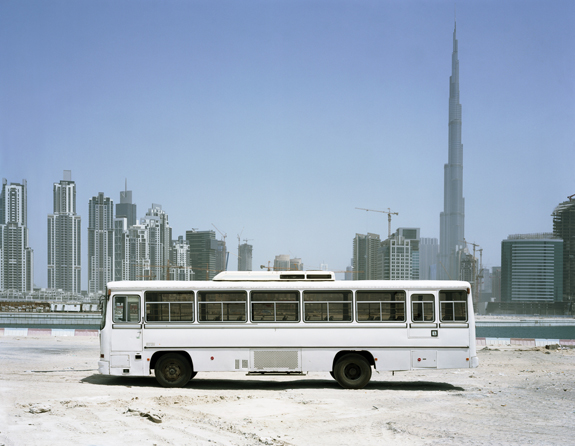 When I first traveled to Dubai I witnessed a city growing uncontrollably out of the desert. Construction sites lined with busses packed full of workers dotted the landscape in every direction. New buildings appeared by the hour. Roads detoured endlessly to make way for man-made lakes and islands. Hundreds of transmission towers suppling power to the metropolis’ increasing energy consumption appeared in the barren areas surrounding the city. I returned a few years later to a much different place. The economic collapse left an unfinished city stuck in the desert. I went throughout the city with a 4×5 camera to photograph the urban landscape that currently occupies a massive expanse of land. Development in many areas has slowed down considerably or even stopped completely, awaiting the funds necessary to complete projects. Buildings remain empty without any occupants in the city core. Pre-built neighborhoods devoid of residents resemble ghost towns. Outlying areas already master planned give the appearance of mirages in the distance. This apparent stagnation clashes with the expectations of the past and the realizations of the future. It’s a transitional period in a city without boundaries. I titled the project Unfinished City.