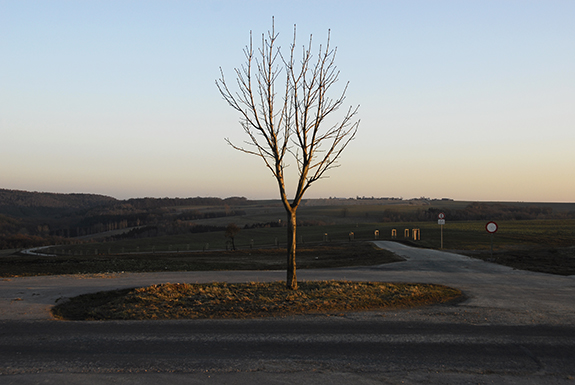 There is a mostly hidden and often disregarded universe within our space of life: the province. The province is borderless: it has no real beginning and no well-defined ending, except at the edges of urban zones, which are like islands, like galaxies in an wide and secluded area. Province is an interspace which is connected worldwide with itself.

I am searching for my “objets trouvés” in the nameless countryside, in the extensive absence, in the aside, in the silent realms, where everything seems conventional and unspectacular. I am searching for the similar and the singular there, and even in the biggest tristesse I can find the beauty of melancholia or some rests of lost times, which are spending a strange and lovely form of idyllic shelter.

Furthermore I want to find out what is the character of province, what is special there, what is common, what is the atmospheric fingerprint of an area that I walk or drive through.

For me the province is a room of lost time and no-time, there is only past and a small quantum of presence, but not the illusion of future, which is forming the awareness of life in our cities.

So the main location of my work is the province, the backwoods, the outside. And one of my favorite photographic series is called Universum Provinz. It is a never-ending series, because universe is infinite.