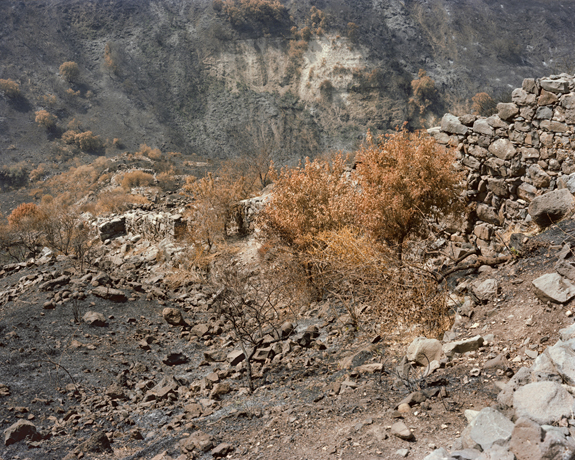 The photographs in this series, titled Scarred Land, which were all produced in Israel, deal with war, the damage it inflicts upon the terrain, and the natural recovery over time. The battle sites and military training zones depicted have not been memorialized or preserved in any way, and are now naturally recovering from the inflicted trauma as well as being reclaimed by the earth. The focus of the imagery on war zones is to portray to the viewer that this is how we, as human beings, treat each other and the world we live in.

We are a unique species defined by our intelligence: the ability of abstract thought, understanding, self- awareness, communication, reasoning, learning, having emotional knowledge, retaining, planning, and problem solving. This intelligence enables us to create/invent ever growing technologies through which to better our lives. Unfortunately, some of these technologies are also implemented for the purpose to assault one another and to defend ourselves, which in turn damages the Earth. In my opinion the rationale for going to war with another nation, state or people — whether it be over resources, religious ideology, cultural differences, or power — is completely absurd. If everyone took the time to look at the larger picture, the traumas inflicted during war and in its aftermath have detrimental repercussions for not only us and future generations, but for the planet we inhabit and all of its living beings. Therefore, the ramifications are not advantageous to anyone or anything and we could eventually be the means to our own demise.